In case you missed it, and you probably did given last week’s election fever, we’ve provided the key takeaways from the day below. 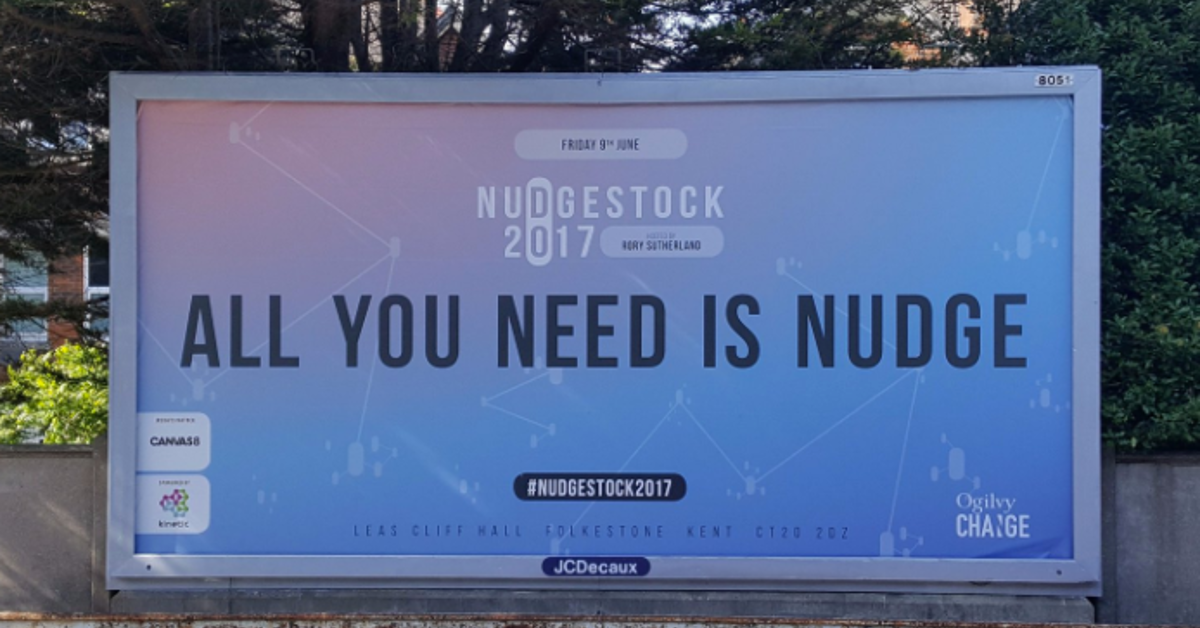 As regular attendees of Nudgestock will know, a key highlight is Rory Sutherland’s intro. This year, Rory praised the increasing role that technology is playing in the industry, but he advised that marketers must stay alert to the importance of psychology. In the future, it will be marketers ability to ‘tinker with perception, rather than product’ that will drive growth.

After Rory, the schedule was packed with a whopping 14 speakers. We’ve compiled some highlights for marketers but for a more comprehensive round-up, make sure you follow @OgilvyConsultUK and keep your eye out for their recap videos from the event.

Perhaps the most anticipated speaker of this year’s Nudgestock was Dominic Cummings, the Campaign Director of Vote Leave, the official campaign of the ‘leave’ vote in last year’s EU referendum.

Dominic explained how Vote Leave considered their task in terms of the modern understanding of risk preferences. Academic experiments, such as those by Holt & Laury, have highlighted that people often exhibit risk averse behaviour. Sometimes this is driven by a consistent preference to maintain the status quo; otherwise known as “status quo bias.”

The Vote Leave campaign therefore faced a structural challenge; a vote to leave the EU was a vote against the status quo. Understanding this was what led Dominic’s team to craft a message that framed staying in the EU as more risky than leaving.

While some were sceptical of the sophistication of Cumming’s engagement with behavioural economics, his notoriety made for an engaging 15 minutes that was thought-provoking for marketers.

Investing in a product can for example be seen as a risk that is only justified by its potential benefits. Cummings’s strategy might inspire us to reverse that calculation and employ marketing tactics that play up the risks of not investing, like future regrets.

Cummings also had lessons for marketers in their use of customer archetypes.

Vote Leave, he explained, had recognised that they needed to appeal to voters across their ordinary party affiliations. This meant tearing up the traditional archetypes of Tory or Labour voters and combining issues, such as a traditional Tory concern like reducing immigration with a Labour staple like more money for the NHS.

This tactic, born of political necessity, gives marketers a blueprint for potential success. The use of customer archetypes has become common practice but we ought to remember not to cling too closely to stereotypes that are far less complex and unpredictable than real people.

Julia Hobsbawm, the world’s first ‘Professor of Networking’, took her cue from Sutherland and turned her attention to the intersection of technology and psychology.

Julia highlighted how despite living in an age of ever greater connection, many of us are neglecting the connections that are most important for our well-being. If this sounds like you then you may want to heed Julia’s advice.

Julia honed in on the ‘infobesity’ crisis that we face. That’s the swollen and ever-growing belly of information that we carry through our daily lives. When we have too much information, it actually becomes harder to make decisions. It is a specific and extreme example of the ‘paradox of choice’ that we face as citizens in a liberal society.

In content marketing, there seems to be a ‘race to the bottom’ based on the idea that being first & frequent in communicating with audiences will yield the biggest benefit. However, with the backing of years of her research, Julia predicts that it will be the brands that can provide curated content that will ‘win’ in this sphere.

These comments follow neatly from discussions at Nudgestock the previous year, where BuzzFeed Editor Robert Colville forecasted that it will be weekly publications that endure.

Medium for example has garnered a huge readership by championing long-form content and willingness to pay for such curation is also growing. Subscriptions to trusted curators such as The Economist have increased sharply in the last few years.

Marketers may therefore want to audit their content strategies by asking the question, are you adding to the infobesity crisis, or cutting through it?

Charlotte Pearce, CEO of Inkpact & Forbes #30under30 candidate, delivered a talk on the need for marketing to address fundamental human needs.

Charlotte’s enterprise, Inkpact, delivers handwritten communication for clients. This helps solve the twin problems that marketing emails are increasingly ignored and that meeting every customer in person is unrealistic. Inkpact have found that their success (with leading brands such as IBM and Tesco) is driven by their campaigns’ ability to meet 5 of our 6 fundamental human needs.

The concept of the 6 fundamental human needs originates with renowned coach and speaker Tony Robbins, and it grew out of his work on personal development with over 3 million people. He argues that all humans require certainty, variety, significance, love and connection, growth, and a sense of contribution.

Inkpact base their brand around these powerful ideas and Charlotte urged marketers to do the same in order to get closer to their customers and treat them like real people.

Geoffrey Miller’s closing talk at Nudgestock examined the impact that virtue-signaling can have on the relationship between a brand and its consumers.

Geoffrey observed that ‘virtue-signaling’ frequently has negative connotations and he warned that in some cases brands ought indeed to remain wary. When Starbucks for example unveiled a plan to hire 10,000 refugees, they experienced a sharp drop in brand perception as what was seen by some as an unwelcome intervention in politics provoked boycotts. Yet virtue-signaling can just as often lead to buycotts as boycotts.

People use the products they buy as an extension of their self-image and Geoffrey noted that brands can capitalise on this by aligning themselves with the key personality traits that are expressed in their customer base.

In his view, United Colors of Benetton have achieved this, signaling a sense of ‘high openness’ which is shared with many of the company’s liberal-minded customers.

If you feel virtue-signaling could benefit your marketing, the key takeaway from Geoffrey’s presentation is that you must base your signaling on thorough research of your customers. Failure to do so puts you at risk of the ‘false consensus effect’ and could have grave consequences for your company.

At the end of the day it was encouraging to see so many marketers engaging more closely with behavioural science.

There was a notable improvement on last year in the level of seriousness and sophistication in marketers’ understanding of the academic discipline. Although the festival was still more thought-provoking than immediately practical for marketers, those thoughts are ones that marketers are increasingly enthusiastic to have.

Cookies are small text files that websites ask your browser to store. Sometimes first-party cookies are required for core features of a website to function properly. Many other cookies are used for marketing purposes. For example, we use Google Analytics on this site. Google Analytics uses cookies to record information about how many people are visiting our website, how long they stay, which pages they read and so on. There is a full list of the cookies used by our website on our cookies page.
Necessary Always Enabled

This website uses some cookies for marketing purposes. These cookies are associated with tools like Google Analytics. They are not necessary for the site to function but help our Marketing department do a better job. You can switch them on or off and your experience of the website should be unaffected.